“Thank you again for our session! I am not pregnant at the moment (just got my period), but am so excited to know that someday I will have a little girl (or twins!). After talking with my mom, I realized that the cousin who died in a vehicle accident is my grandmother’s cousin, who died in a tractor accident. I only knew him when I was a little girl, and he was not even on my radar of who I would hear from! Also, that cousin’s brother was shot in the head in a store robbery before I was even born – I can’t believe he would have shown up, either!

I contacted my ex-sister-in-law to see if my brother was taking his meds when they were married. She said she thinks yes, but said she wonders if my dad meant that things will get better when he is taking the RIGHT meds. If he is deceiving his doctors, and is only taking medicine to improve his focus, but not taking anything for OCD, than it makes sense that he would be focusing more on his obsessions! She also said that she received an anonymous email from my brother’s girlfriend’s friend who is concerned about her and her relationship with Chip. I am keeping my mouth shut about it, and trying not to think about it, but I hope she figures things out and gets out soon!
I have referred several people to you already. I don’t know when they plan on contacting you, but hopefully they will soon! Thanks again for everything!”-Meredith 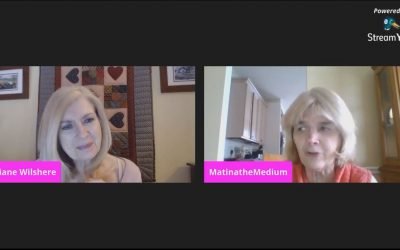 Interview with Matina the Medium Women Entrepreneurs Living Their Dream

In this interview between Diane Wilshere and Matina The Medium, you can hear all about her journey. Diane runs a facebook group Entrepreneurs Living their Dream

END_OF_DOCUMENT_TOKEN_TO_BE_REPLACED

“For years I have been wanting to have a reading with a medium to hopefully contact my mother who I lost when I was a teenager, unresolved and questions about my path forward. Matina was instrumental in making this experience positive, informative and a renewed sense...

END_OF_DOCUMENT_TOKEN_TO_BE_REPLACED

“I’ve been wanting to meet with a medium for quite a while. I decided to Google “Psychic Mediums in St Louis” and was immediately drawn to Matina’s webpage. I know that there are “quacks” out there, so I did my homework and knew she was the real deal. When I first met...